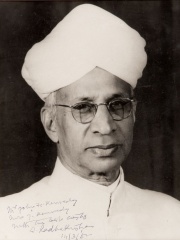 Sarvepalli Radhakrishnan (Sarvepalli Radhakrishnayya; pronunciation 5 September 1888 – 17 April 1975) was an Indian philosopher and statesman who served as the second president of India from 1962 to 1967.One of the most distinguished twentieth-century scholars of comparative religion and philosophy, Radhakrishnan held the King George V Chair of Mental and Moral Science at the University of Calcutta from 1921 to 1932 and Spalding Chair of Eastern Religion and Ethics at University of Oxford from 1936 to 1952.Radhakrishnan's philosophy was grounded in Advaita Vedanta, reinterpreting this tradition for a contemporary understanding. He defended Hinduism against what he called "uninformed Western criticism", contributing to the formation of contemporary Hindu identity. He has been influential in shaping the understanding of Hinduism, in both India and the west, and earned a reputation as a bridge-builder between India and the West.Radhakrishnan was awarded several high awards during his life, including a knighthood in 1931, the Bharat Ratna, the highest civilian award in India, in 1954, and honorary membership of the British Royal Order of Merit in 1963. Read more on Wikipedia

Sarvepalli Radhakrishnan was a philosopher, scholar, and politician who is most famous for being the second president of India.