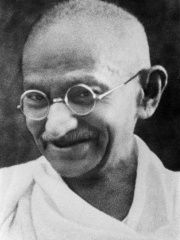 Mohandas Karamchand Gandhi (2 October 1869 – 30 January 1948) was an Indian lawyer, anti-colonial nationalist and political ethicist who employed nonviolent resistance to lead the successful campaign for India's independence from British rule, and was to inspire movements for independence and civil rights across the world. The honorific Mahātmā (Sanskrit: "great-souled", "venerable"), first applied to him in 1914 in South Africa, is now used throughout the world.Born and raised in a Hindu family in coastal Gujarat, Gandhi trained in the law at the Inner Temple, London, and was called to the bar at age 22 in June 1891. After two uncertain years in India, where he was unable to start a successful law practice, he moved to South Africa in 1893 to represent an Indian merchant in a lawsuit. Read more on Wikipedia

Mahatma Gandhi is most famous for being the leader of the Indian independence movement and for his philosophy of nonviolent resistance.