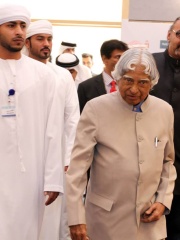 Avul Pakir Jainulabdeen Abdul Kalam ( (listen); 15 October 1931 – 27 July 2015) was an Indian aerospace scientist and statesman who served as the 11th President of India from 2002 to 2007. He was born and raised in Rameswaram, Tamil Nadu and studied physics and aerospace engineering. He spent the next four decades as a scientist and science administrator, mainly at the Defence Research and Development Organisation (DRDO) and Indian Space Research Organisation (ISRO) and was intimately involved in India's civilian space programme and military missile development efforts. Read more on Wikipedia

A. P. J. Abdul Kalam is most famous for being the 11th President of India, and for his contributions to the development of India's missile and space programs.

Page views of A. P. J. Abdul Kalams by language

Among politicians, A. P. J. Abdul Kalam ranks 171 out of 15,577. Before him are Alexander I of Russia, Pol Pot, Catherine I of Russia, Demosthenes, Batu Khan, and Joanna of Castile. After him are Henry III of France, Akbar, Reinhard Heydrich, Frederick II, Holy Roman Emperor, Suleiman II, and Thutmose III.