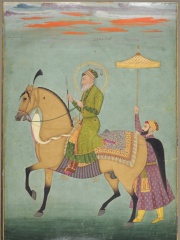 Muhi al-Din Muhammad (Persian: محی الدین محمد, romanized: Muḥī al-Dīn Muḥammad; c. 1618 – 3 March 1707), commonly known as Aurangzeb (Persian: اورنگ‌زیب, lit. 'Ornament of the Throne') and by his regnal title Alamgir (Persian: عالمگیر, romanized: ʿĀlamgīr, lit. 'Conqueror of the World'), was the sixth emperor of the Mughal Empire, ruling from July 1658 until his death in 1707. Under his emperorship, the Mughals reached their greatest extent with their territory spanning nearly the entirety of South Asia.Widely considered to be the last effective Mughal ruler, Aurangzeb compiled the Fatawa 'Alamgiri and was amongst the few monarchs to have fully established Sharia and Islamic economics throughout South Asia.Belonging to the aristocratic Timurid dynasty, Aurangzeb's early life was occupied with pious pursuits. He held administrative and military posts under his father Shah Jahan (r. Read more on Wikipedia

Aurangzeb is most famous for being a Muslim emperor who ruled India and Pakistan from 1658 to 1707. He was the last of the Mughal emperors.

Page views of Aurangzebs by language