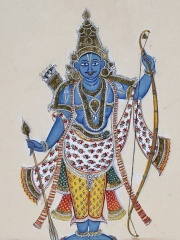 Rama (; IAST: Rāma, pronounced [ˈraːmɐ] (listen); Sanskrit: राम), Ram, Raman or Ramar, also known as Ramachandra (; IAST: Rāmacandra, Sanskrit: रामचन्द्र), is a major deity in Hinduism. He is the seventh and one of the most popular avatars of Vishnu. In Rama-centric traditions of Hinduism, he is considered the Supreme Being.Rama is said to have been born to Kaushalya and Dasharatha in Ayodhya, the ruler of the Kingdom of Kosala. Read more on Wikipedia

Rama is most famous for being the seventh avatar of Vishnu, and is the hero of the Hindu epic Ramayana.

Page views of Ramas by language

Among politicians, Rama ranks 1,082 out of 15,710. Before him are Isaac II Angelos, Robert I of France, Empress Gi, Pierre Laval, Chongzhen Emperor, and James A. Garfield. After him are Christian III of Denmark, Faisal I of Iraq, Psamtik I, Ptolemy III Euergetes, Polycrates, and Ferdinand VI of Spain.