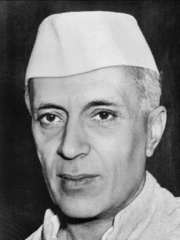 Jawaharlal Nehru (; Hindi: [ˈdʒəʋɑːɦəɾˈlɑːl ˈneːɦɾuː] (listen); juh-WAH-hurr-LAHL NE-hǝ-ROO; 14 November 1889 – 27 May 1964) was an Indian anti-colonial nationalist, secular humanist, social democrat, statesman and author who was a central figure in India during the middle of the 20th century. Nehru was a principal leader of the Indian nationalist movement in the 1930s and 1940s. Upon India's independence in 1947, he became the 1st Prime Minister of India, serving for 16 years. Read more on Wikipedia

Jawaharlal Nehru was the first Prime Minister of India. He is most famous for his role in the struggle for Indian independence from British rule, and his subsequent attempts to modernize and secularize India.

Among politicians, Jawaharlal Nehru ranks 190 out of 15,577. Before him are Kublai Khan, Alp Arslan, Joseph II, Holy Roman Emperor, Salman of Saudi Arabia, Donald Trump, and Leonidas I. After him are Louis the Pious, Caracalla, Salvador Allende, Klemens von Metternich, Titus, and Edward IV of England.