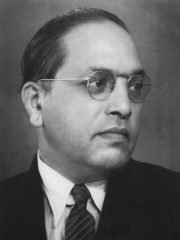 Bhimrao Ramji Ambedkar (IPA: [bhɪməɑo ɹæmdʒi ɑmbɛdkɑə]; 14 April 1891 – 6 December 1956) was an Indian jurist, economist, and social reformer who fought economic and social discrimination against the untouchables (now dalits) in India's Hindu society, and who later renounced Hinduism and inspired the Dalit Buddhist movement. Ambedkar served as chairman of the drafting committee of the Constitution of India, and Minister of Law and Justice in the first cabinet of Jawaharlal Nehru from 1947 to 1951. He is also referred to by the honorific Babasaheb (BAH-bə SAH-hayb). Read more on Wikipedia

Dr. Bhimrao Ramji Ambedkar was an Indian jurist, economist, politician, and social reformer who inspired the Dalit Buddhist movement and campaigned against social discrimination against Untouchables (Dalits). He was Independent India's first law minister and the principal architect of the Constitution of India.

Page views of B. R. Ambedkars by language

Among politicians, B. R. Ambedkar ranks 1,014 out of 15,710. Before him are Dionysius I of Syracuse, Wojciech Jaruzelski, James I of Aragon, Cambyses I, Jean-Bédel Bokassa, and Nabonidus. After him are John I of Portugal, Hamid Karzai, Yazdegerd III, Joachim Gauck, James Madison, and Shaka.