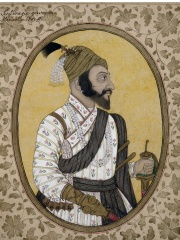 Shivaji Bhonsale I (Marathi pronunciation: [ʃiʋaˑd͡ʒiˑ bʱoˑs(ə)leˑ]; c.19 February 1630 – 3 April 1680), also referred to as Chhatrapati Shivaji, was an Indian ruler and a member of the Bhonsle Maratha clan. Shivaji carved out an enclave from the declining Adilshahi sultanate of Bijapur that formed the genesis of the Maratha Empire. In 1674, he was formally crowned the Chhatrapati of his realm at Raigad.Over the course of his life, Shivaji engaged in both alliances and hostilities with the Mughal Empire, the Sultanate of Golkonda, Sultanate of Bijapur and the European colonial powers. Read more on Wikipedia

Since 2007, the English Wikipedia page of Shivaji has received more than 11,641,877 page views. His biography is available in 57 different languages on Wikipedia (up from 53 in 2019). Shivaji is the 463rd most popular politician (down from 439th in 2019), the 16th most popular biography from India and the 5th most popular Indian Politician.

Shivaji is most famous for his role in uniting the Maratha people and fighting against the Mughal Empire.

Page views of Shivajis by language

Among politicians, Shivaji ranks 463 out of 15,710. Before him are Constantius II, Æthelstan, Ecgberht, King of Wessex, Georges Pompidou, Charles III of Spain, and Juan Perón. After him are Emperor Taizong of Tang, Albert II of Germany, Alexander Lukashenko, Atahualpa, Gaiseric, and Rudolf Höss.