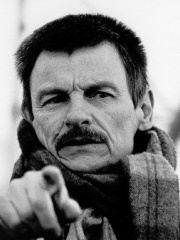 Andrei Arsenyevich Tarkovsky (Russian: Андрей Арсеньевич Тарковский, IPA: [ɐnˈdrʲej ɐrˈsʲenʲjɪvʲɪtɕ tɐrˈkofskʲɪj]; 4 April 1932 – 29 December 1986) was a Soviet and Russian filmmaker, theatre director, writer, and film theorist. He is widely considered one of the greatest and most influential directors in the history of Russian and world cinema. His films explored spiritual and metaphysical themes, and are noted for their slow pacing and long takes, dreamlike visual imagery, and preoccupation with nature and memory.Tarkovsky studied film at Moscow's VGIK under filmmaker Mikhail Romm, and subsequently directed his first five feature films in the Soviet Union: Ivan's Childhood (1962), Andrei Rublev (1966), Solaris (1972), Mirror (1975), and Stalker (1979). Read more on Wikipedia

Andrey Tarkovsky is most famous for his films. He made a lot of them and they are all very different from each other. He was also a photographer and a poet.

Among FILM DIRECTORS In Russia