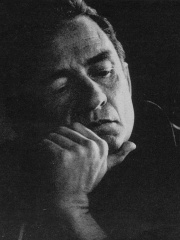 John R. Cash (born J. R. Cash; February 26, 1932 – September 12, 2003) was an American country singer-songwriter. Much of Cash's music contained themes of sorrow, moral tribulation, and redemption, especially in the later stages of his career. He was known for his deep, calm bass-baritone voice, the distinctive sound of his Tennessee Three backing band characterized by train-like chugging guitar rhythms, a rebelliousness coupled with an increasingly somber and humble demeanor, free prison concerts, and a trademark all-black stage wardrobe, which earned him the nickname the "Man in Black".Born to poor cotton farmers in Kingsland, Arkansas, Cash rose to fame during the mid-1950s in the burgeoning rockabilly scene in Memphis, Tennessee, after four years in the Air Force. Read more on Wikipedia

Johnny Cash is most famous for his music and his voice.