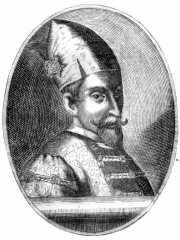 Feodor I of Russia

Fyodor I Ivanovich (Russian: Фёдор I Иванович) or Feodor I Ioannovich (Russian: Феодор I Иоаннович; 31 May 1557 – 17 January (NS) 1598), also known as Feodor the Bellringer (Russian: Феодор Звонарь), reigned as Tsar of Russia from 1584 until his death in 1598. Feodor's mother died when he was three, and he grew up in the shadow of his father, Ivan the Terrible. A pious man of retiring disposition, Feodor took little interest in politics, and the country was effectively administered in his name by Boris Godunov, the brother of his beloved wife Irina. Read more on Wikipedia

Feodor I of Russia is most famous for his reign as tsar of Russia from 1682 to 1725. He was the first tsar of Russia to be born in Moscow, and he is also credited with founding the Russian Navy.

Page views of Feodor I of Russias by language

Among politicians, Feodor I of Russia ranks 442 out of 15,577. Before him are Moon Jae-in, James II of England, António Guterres, William III of England, Louis VII of France, and Ali Khamenei. After him are Clara Zetkin, Emperor Gaozu of Han, George I of Great Britain, Vitellius, Miklós Horthy, and Pertinax.

Among people born in 1557, Feodor I of Russia ranks 2. Before him is Matthias, Holy Roman Emperor. After him are Giovanni Gabrieli, Agostino Carracci, Sophie of Mecklenburg-Güstrow, Stephen Bocskai, Balthasar Gérard, Irina Godunova, Oda Nobutada, Frederick I, Duke of Württemberg, Lew Sapieha, and Philip Howard, 13th Earl of Arundel. Among people deceased in 1598, Feodor I of Russia ranks 3. Before him are Philip II of Spain and Toyotomi Hideyoshi. After him are Yi Sun-sin, Abraham Ortelius, Anne of Austria, Queen of Poland, John George, Elector of Brandenburg, William Cecil, 1st Baron Burghley, Abdullah Khan II, Theodor de Bry, Paolo Boi, and Henri Estienne.