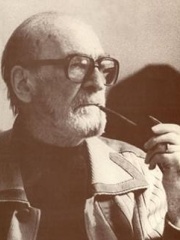 Mircea Eliade (Romanian: [ˈmirtʃe̯a eliˈade]; March 13 [O.S. February 28] 1907 – April 22, 1986) was a Romanian historian of religion, fiction writer, philosopher, and professor at the University of Chicago. He was a leading interpreter of religious experience, who established paradigms in religious studies that persist to this day. His theory that hierophanies form the basis of religion, splitting the human experience of reality into sacred and profane space and time, has proved influential. Read more on Wikipedia

Mircea Eliade is most famous for his book "The Sacred and the Profane: The Nature of Religion" which argues that religion is a human response to the experience of the sacred.

Among historians, Mircea Eliade ranks 20 out of 339. Before him are Manetho, Hecataeus of Miletus, Procopius, Cassius Dio, Arnold J. Toynbee, and Johann Joachim Winckelmann. After him are Fernand Braudel, Leopold von Ranke, Johan Huizinga, Saxo Grammaticus, Jacob Burckhardt, and Bede.

Among HISTORIANS In Romania