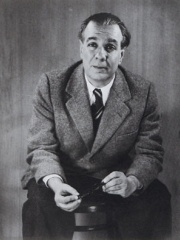 Jorge Francisco Isidoro Luis Borges Acevedo (; Spanish: [ˈboɾxes] (listen); 24 August 1899 – 14 June 1986) was an Argentine short-story writer, essayist, poet and translator, as well as a key figure in Spanish-language and international literature. His best-known books, Ficciones (Fictions) and El Aleph (The Aleph), published in the 1940s, are collections of short stories exploring themes of dreams, labyrinths, chance, infinity, archives, mirrors, fictional writers and mythology. Borges' works have contributed to philosophical literature and the fantasy genre, and majorly influenced the magic realist movement in 20th century Latin American literature.Born in Buenos Aires, Borges later moved with his family to Switzerland in 1914, where he studied at the Collège de Genève. Read more on Wikipedia

Jorge Luis Borges is most famous for being a short story writer. He was born in Buenos Aires, Argentina in 1899 and wrote many short stories, poems, and essays. His most famous work is "The Garden of Forking Paths."