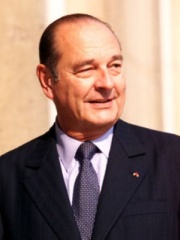 Jacques René Chirac (UK: SHEER-ak, US: (listen) ZHAHK sheer-AHK, French: [ʒak ʁəne ʃiʁak] (listen); 29 November 1932 – 26 September 2019) was a French politician who served as President of France from 1995 to 2007. Chirac was previously the Prime Minister of France from 1974 to 1976 and from 1986 to 1988, as well as the Mayor of Paris from 1977 to 1995. After attending the École nationale d'administration, Chirac began his career as a high-level civil servant, entering politics shortly thereafter. Read more on Wikipedia

Among politicians, Jacques Chirac ranks 284 out of 15,710. Before him are Golda Meir, Khafra, Edward II of England, Lee Kuan Yew, Bill Clinton, and Herod Antipas. After him are Charles VIII of France, Eva Perón, Xi Jinping, Alexander II of Russia, Victor Emmanuel II of Italy, and Nerva.