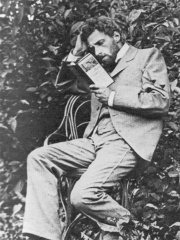 Vsevolod Emilyevich Meyerhold (Russian: Всеволод Эмильевич Мейерхольд, romanized: Vsévolod Èmíl'evič Mejerchól'd; born German: Karl Kasimir Theodor Meyerhold; 9 February [O.S. 28 January] 1874 – 2 February 1940) was a Russian and Soviet theatre director, actor and theatrical producer. His provocative experiments dealing with physical being and symbolism in an unconventional theatre setting made him one of the seminal forces in modern international theatre. During the Great Purge, Meyerhold was arrested in June 1939. Read more on Wikipedia

Vsevolod Meyerhold was a Russian theater director and theorist who was most famous for his biomechanics, which is a system of physical training that he developed for actors.

Among politicians, Vsevolod Meyerhold ranks 2,926 out of 15,577. Before him are Nigel Farage, Parashurama, Konrad Henlein, Abdullah al-Mahdi Billah, Abaoji, and Milan Kučan. After him are Sweyn III of Denmark, Isma'il ibn Ahmad, Luís Filipe, Prince Royal of Portugal, Basarab I of Wallachia, Charles III, Prince of Monaco, and Ildibad.