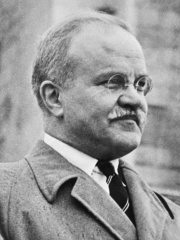 Vyacheslav Mikhailovich Molotov (; né Skryabin; (OS 25 February) 9 March 1890 – 8 November 1986) was a Russian politician and diplomat, an Old Bolshevik, and a leading figure in the Soviet government from the 1920s onward. He served as Chairman of the Council of People's Commissars from 1930 to 1941 and as Minister of Foreign Affairs from 1939 to 1949 and from 1953 to 1956. Born in Kukarka, Molotov joined the Russian Social Democratic Labour Party (RSDLP) in 1906, supported Vladimir Lenin's Bolshevik faction, and was twice arrested and exiled for revolutionary activities. Read more on Wikipedia

Vyacheslav Molotov was a Russian politician and diplomat who served as the Soviet Union's Minister of Foreign Affairs from 1939 to 1949. He is most famous for negotiating the Molotov-Ribbentrop Pact, which was a non-aggression pact between Nazi Germany and the Soviet Union.

Among politicians, Vyacheslav Molotov ranks 351 out of 15,710. Before him are Louis II of Hungary, George V, Barack Obama, Goliath, Liu Bei, and Cambyses II. After him are Caesarion, Theodosius II, Henry VI of England, Erich Honecker, Helmut Kohl, and Park Chung-hee.