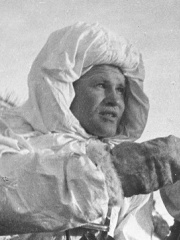 Vasily Grigoryevich Zaitsev (Russian: Васи́лий Григо́рьевич За́йцев, IPA: [vɐˈsʲilʲɪj ɡrʲɪˈɡorʲjɪvʲɪdʑ ˈzajtsɨf]; 23 March 1915 – 15 December 1991) was a Soviet sniper during World War II. Between 22 September 1942 and 19 October 1942, he killed 40 enemy soldiers. Between 10 October 1942 and 17 December 1942, during the Battle of Stalingrad, he killed 225 enemy soldiers.Zaitsev became a celebrated figure during the war and later a Hero of the Soviet Union, and he remains lauded for his skills as a sniper. His life and military career have been the subject of several books and films: his exploits, as detailed in William Craig's 1973 book Enemy at the Gates: The Battle for Stalingrad, served as the story for the 2001 film Enemy at the Gates, with Jude Law portraying Zaitsev. He is also featured in David L. Read more on Wikipedia

Vasily Zaitsev is most famous for his role in the Battle of Stalingrad. He was a Soviet sniper who used his skills to kill over 225 German soldiers.