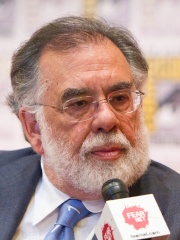 Francis Ford Coppola (; Italian: [ˈkɔppola]; born April 7, 1939) is an American film director, producer and screenwriter. He was a central figure in the New Hollywood filmmaking movement of the 1960s and 1970s, and is widely considered to be one of the greatest filmmakers of all time.After directing The Rain People in 1969, Coppola co-wrote Patton (1970), earning the Academy Award for Best Original Screenplay along with Edmund H. North. Coppola's reputation as a filmmaker was cemented with the release of The Godfather (1972). Read more on Wikipedia

Since 2007, the English Wikipedia page of Francis Ford Coppola has received more than 8,010,318 page views. His biography is available in 78 different languages on Wikipedia making him the 13th most popular film director.