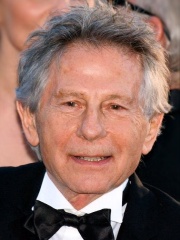 Roman Polanski (Polish: Polański , pə-LAN-skee, [ˈrɔman pɔˈlaj̃skʲi] (Listen); born Raymond Thierry Liebling; 18 August 1933) is a Polish-French film director, producer, writer, and actor. Polanski is also a fugitive from the U.S. criminal justice system; he fled the country in 1977 while awaiting sentencing for unlawful intercourse with a minor.His Polish-Jewish parents moved the family back from Paris to Kraków in 1937. Two years later, Poland was invaded by Nazi Germany starting World War II and the Polanskis found themselves trapped in the Kraków Ghetto. Read more on Wikipedia

Roman Polanski is a Polish-French film director, producer, writer, and actor. He is most famous for directing the films Chinatown, Rosemary's Baby, and The Pianist.