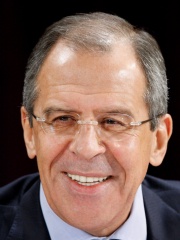 Sergey Viktorovich Lavrov (Russian: Сергей Викторович Лавров, pronounced [sʲɪrˈɡʲej ˈvʲiktərəvʲɪtɕ lɐˈvrof]; born 21 March 1950) is a Russian diplomat and politician who has served as the Foreign Minister of Russia since 2004. Read more on Wikipedia

Sergey Lavrov is a Russian diplomat and politician who has served as Minister of Foreign Affairs of the Russian Federation since 2004. He is the longest-serving foreign minister in post-Soviet Russia.

Among politicians, Sergey Lavrov ranks 2,592 out of 15,710. Before him are Yaropolk I of Kiev, Vasily I of Moscow, Christina of Lorraine, Vajiravudh, René Coty, and Arsinoe IV of Egypt. After him are Alfonso II of Naples, Gennady Zyuganov, Choummaly Sayasone, Afonso I of Kongo, Lin Zexu, and Gaston Doumergue.