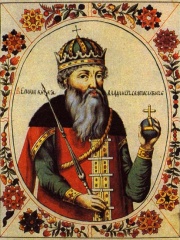 Vladimir I or Volodymyr I (Old East Slavic: Володимѣръ Свѧтославичь, Volodiměrъ Svętoslavičь; Russian: Владимир Святославич, Vladimir Svyatoslavich; Ukrainian: Володимир Святославич, Volodymyr Sviatoslavych; Old Norse Valdamarr gamli; c. 958 – 15 July 1015), called the Great, was Prince of Novgorod, Grand Prince of Kiev, and ruler of Kievan Rus' from 980 to 1015.Vladimir's father was Prince Sviatoslav I of Kiev of the Rurik dynasty. After the death of his father in 972, Vladimir, who was then prince of Novgorod, was forced to flee to Scandinavia in 976 after his brother Yaropolk murdered his other brother Oleg of Drelinia and conquered Rus'. Read more on Wikipedia

Vladimir the Great was most famous for his conversion of the Slavs to Christianity.

Page views of Vladimir the Greats by language

Among politicians, Vladimir the Great ranks 449 out of 15,710. Before him are Guy of Lusignan, Frederick III, Holy Roman Emperor, George I of Great Britain, Ashurbanipal, Robert Schuman, and Charles the Simple. After him are Ludwig II of Bavaria, John, King of England, Safiye Sultan, Tomyris, Boris Godunov, and Yongle Emperor.