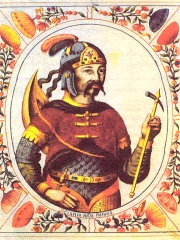 Rurik of Ladoga (also Ryurik or Rorik; Old East Slavic: Рюрикъ Rjurikŭ, from Old Norse Hrøríkʀ; Belarusian: Рурык; Russian, Ukrainian: Рюрик; c. 824–879), according to the 12th-century Primary Chronicle, was a Varangian chieftain of the Rus' who in the year 862 was invited to reign in Ladoga or Novgorod. Read more on Wikipedia

Since 2007, the English Wikipedia page of Rurik has received more than 1,277,538 page views. His biography is available in 58 different languages on Wikipedia. Rurik is the 412th most popular politician (up from 582nd in 2019), the 55th most popular biography from Russia (up from 71st in 2019) and the 20th most popular Russian Politician.

Rurik is most famous for founding the Kievan Rus, which became the first Russian state.

Page views of Ruriks by language

Among politicians, Rurik ranks 412 out of 15,710. Before him are Charles I of England, Carl Gustaf Emil Mannerheim, Charles IV of France, Mahmud I, Servius Tullius, and Henry the Fowler. After him are Taejo of Joseon, Charles the Fat, Frederick III, German Emperor, Sukarno, Macrinus, and Matthias, Holy Roman Emperor.

Among people born in 830, Rurik ranks 1. After him are Pope Marinus I, Carloman of Bavaria, Saint Naum, Junayd of Baghdad, Baldwin I, Margrave of Flanders, Guthrum, Ermentrude of Orléans, Kocel, Rimbert, Emperor Kōkō, and Mutimir of Serbia. Among people deceased in 879, Rurik ranks 1. After him are Louis the Stammerer, Anastasius Bibliothecarius, Baldwin I, Margrave of Flanders, Ya'qub ibn al-Layth al-Saffar, Ansgarde of Burgundy, and Zdeslav of Croatia.