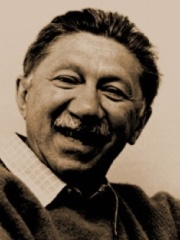 Abraham Harold Maslow (; April 1, 1908 – June 8, 1970) was an American psychologist who was best known for creating Maslow's hierarchy of needs, a theory of psychological health predicated on fulfilling innate human needs in priority, culminating in self-actualization. Maslow was a psychology professor at Alliant International University, Brandeis University, Brooklyn College, New School for Social Research, and Columbia University. He stressed the importance of focusing on the positive qualities in people, as opposed to treating them as a "bag of symptoms". Read more on Wikipedia

Since 2007, the English Wikipedia page of Abraham Maslow has received more than 2,573,997 page views. His biography is available in 66 different languages on Wikipedia making him the 5th most popular psychologist.

Most Popular PSYCHOLOGISTS in Wikipedia