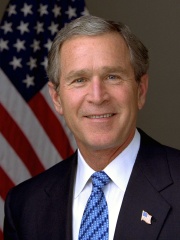 George Walker Bush (born July 6, 1946) is an American politician who served as the 43rd president of the United States from 2001 to 2009. A member of the Republican Party, Bush family, and son of the 41st president George H. W. Bush, he previously served as the 46th governor of Texas from 1995 to 2000. While in his twenties, Bush flew warplanes in the Texas Air National Guard. Read more on Wikipedia

George W. Bush is most famous for being the 43rd president of the United States. He served two terms from 2001-2009. His presidency was marked by the terrorist attacks of September 11th, wars in Afghanistan and Iraq, and the 2008 financial crisis.

Among politicians, George W. Bush ranks 134 out of 15,577. Before him are Narendra Modi, Bayezid II, Kim Jong-il, Francis I of France, Mehmed IV, and Murad II. After him are Deng Xiaoping, Harry S. Truman, Henry V of England, Abdul Hamid II, Sun Yat-sen, and Şehzade Mustafa.