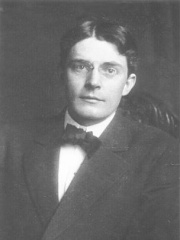 John Broadus Watson (January 9, 1878 – September 25, 1958) was an American psychologist who popularized the scientific theory of behaviorism, establishing it as a psychological school. Watson advanced this change in the psychological discipline through his 1913 address at Columbia University, titled Psychology as the Behaviorist Views It. Through his behaviorist approach, Watson conducted research on animal behavior, child rearing, and advertising, as well as conducting the controversial "Little Albert" experiment and the Kerplunk experiment. Read more on Wikipedia

John B. Watson was most famous for his work with Little Albert. He conducted a study in which he conditioned a child to fear a white rat by pairing it with a loud noise.

Page views of John B. Watsons by language

Among psychologists, John B. Watson ranks 17 out of 183. Before him are William James, Erik Erikson, Viktor Frankl, Carl Rogers, Gustave Le Bon, and Albert Bandura. After him are Kurt Lewin, B. F. Skinner, Edward Thorndike, Melanie Klein, Anna Freud, and Daniel Kahneman.