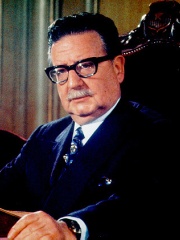 Salvador Guillermo Allende Gossens (US: , UK: , American Spanish: [salβaˈðoɾ ɣiˈʝeɾmo aˈʝende ˈɣosens]; 26 June 1908 – 11 September 1973) was a Chilean physician and socialist politician who served as the 28th president of Chile from 3 November 1970 until his overthrow and suicide on 11 September 1973. He was the first Marxist to be elected president in a liberal democracy in Latin America.Allende's involvement in Chilean politics spanned a period of nearly forty years, having covered the posts of senator, deputy and cabinet minister. As a life-long committed member of the Socialist Party of Chile, whose foundation he had actively contributed to, he unsuccessfully ran for the national presidency in the 1952, 1958, and 1964 elections. Read more on Wikipedia

Salvador Allende was a Chilean politician and physician who became president of Chile in 1970. He was overthrown by a military coup in 1973, and died in the coup.

Among politicians, Salvador Allende ranks 216 out of 15,710. Before him are Emperor Meiji, William the Silent, Empress Dowager Cixi, James VI and I, Scipio Africanus, and Thutmose III. After him are Antoninus Pius, Recep Tayyip Erdoğan, Hulagu Khan, A. P. J. Abdul Kalam, Leopold II, Holy Roman Emperor, and Louis XVIII of France.