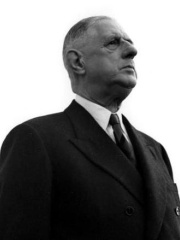 Charles André Joseph Marie de Gaulle (; French pronunciation: [ʃaʁl də ɡol] (listen); 22 November 1890 – 9 November 1970) was a French army officer and statesman who led Free France against Nazi Germany in World War II and chaired the Provisional Government of the French Republic from 1944 to 1946 in order to reestablish democracy in France. In 1958, he came out of retirement when appointed President of the Council of Ministers (Prime Minister) by President René Coty. He rewrote the Constitution of France and founded the Fifth Republic after approval by referendum. Read more on Wikipedia

Charles de Gaulle was a French general and statesman who led the Free French Forces during World War II. He is most famous for being the first president of the Fifth Republic.

Among military personnels, Charles de Gaulle ranks 6 out of 1,466. Before him are Genghis Khan, Alexander the Great, Joan of Arc, Timur, and Spartacus. After him are Erwin Rommel, Karl Dönitz, Charles Martel, Adolf Eichmann, William Wallace, and Chiang Kai-shek.