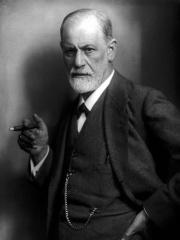 Sigmund Freud ( FROYD; German: [ˈziːkmʊnt ˈfʁɔʏt]; born Sigismund Schlomo Freud; 6 May 1856 – 23 September 1939) was an Austrian neurologist and the founder of psychoanalysis, a clinical method for treating psychopathology through dialogue between a patient and a psychoanalyst.Freud was born to Galician Jewish parents in the Moravian town of Freiberg, in the Austrian Empire. He qualified as a doctor of medicine in 1881 at the University of Vienna. Upon completing his habilitation in 1885, he was appointed a docent in neuropathology and became an affiliated professor in 1902. Read more on Wikipedia

Since 2007, the English Wikipedia page of Sigmund Freud has received more than 12,588,433 page views. His biography is available in 161 different languages on Wikipedia making him the most popular psychologist.