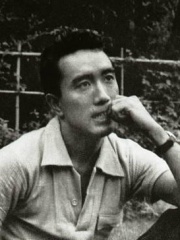 Kimitake Hiraoka (平岡 公威, Hiraoka Kimitake, January 14, 1925 – November 25, 1970), known also under the pen name Yukio Mishima (三島 由紀夫, Mishima Yukio), was a Japanese author, poet, playwright, actor, model, film director, nationalist, and founder of the Tatenokai. Mishima is considered one of the most important Japanese authors of the 20th century. He was considered for the Nobel Prize in Literature in 1968, but the award went to his countryman and friend Yasunari Kawabata. Read more on Wikipedia

Since 2007, the English Wikipedia page of Yukio Mishima has received more than 2,451,300 page views. His biography is available in 83 different languages on Wikipedia making him the 155th most popular writer.

Among writers, Yukio Mishima ranks 153 out of 4,883. Before him are Elias Canetti, Petronius, Charlotte Brontë, Du Fu, Aldous Huxley, and Carlo Collodi. After him are Fernando Pessoa, André Breton, Boris Pasternak, Snorri Sturluson, Janusz Korczak, and Pliny the Younger.