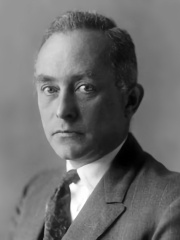 Max Born (German: [ˈmaks ˈbɔɐ̯n]; 11 December 1882 – 5 January 1970) was a German-Jewish physicist and mathematician who was instrumental in the development of quantum mechanics. He also made contributions to solid-state physics and optics and supervised the work of a number of notable physicists in the 1920s and 1930s. Born won the 1954 Nobel Prize in Physics for his "fundamental research in quantum mechanics, especially in the statistical interpretation of the wave function".Born entered the University of Göttingen in 1904, where he found the three renowned mathematicians Felix Klein, David Hilbert, and Hermann Minkowski. He wrote his Ph.D. Read more on Wikipedia

Since 2007, the English Wikipedia page of Max Born has received more than 1,748,773 page views. His biography is available in 84 different languages on Wikipedia making him the 53rd most popular physicist.