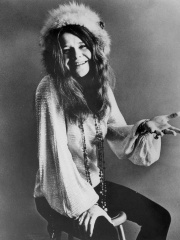 Janis Lyn Joplin (January 19, 1943 – October 4, 1970) was an American singer and musician. One of the most successful and widely known rock stars of her era, she was noted for her powerful mezzo-soprano vocals and "electric" stage presence.In 1967, Joplin rose to fame following an appearance at Monterey Pop Festival, where she was the lead singer of the then little-known San Francisco psychedelic rock band Big Brother and the Holding Company. After releasing two albums with the band, she left Big Brother to continue as a solo artist with her own backing groups, first the Kozmic Blues Band and then the Full Tilt Boogie Band. Read more on Wikipedia

Janis Joplin was a singer and songwriter who is most famous for her work with Big Brother and the Holding Company.

Among singers, Janis Joplin ranks 5 out of 3,528. Before her are Elvis Presley, Édith Piaf, Aretha Franklin, and Cher. After her are Luciano Pavarotti, Maria Callas, Anni-Frid Lyngstad, Charles Aznavour, Dalida, Tina Turner, and Frank Sinatra.