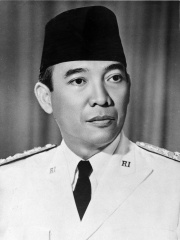 Sukarno (; born Koesno Sosrodihardjo, Javanese: [kʊsnɔ]; 6 June 1901 – 21 June 1970) was an Indonesian statesman, orator, revolutionary, and nationalist who was the first president of Indonesia, serving from 1945 to 1967. Sukarno was the leader of the Indonesian struggle for independence from the Dutch colonialists. He was a prominent leader of Indonesia's nationalist movement during the colonial period and spent over a decade under Dutch detention until released by the invading Japanese forces in World War II. Sukarno and his fellow nationalists collaborated to garner support for the Japanese war effort from the population, in exchange for Japanese aid in spreading nationalist ideas. Read more on Wikipedia

Since 2007, the English Wikipedia page of Sukarno has received more than 3,324,751 page views. His biography is available in 94 different languages on Wikipedia (up from 90 in 2019). Sukarno is the 503rd most popular politician (down from 416th in 2019), the most popular biography from Indonesia and the most popular Politician.

Sukarno was the first president of Indonesia and was most famous for leading the country to independence.

Page views of Sukarnos by language

Among politicians, Sukarno ranks 503 out of 15,577. Before him are Tahmasp I, John II of France, Hafez al-Assad, Christian VII of Denmark, Jean-Baptiste Colbert, and Heraklonas. After him are Frederick William I of Prussia, Abdulmejid II, Norodom Sihanouk, Anna of Russia, Moctezuma II, and Syngman Rhee.