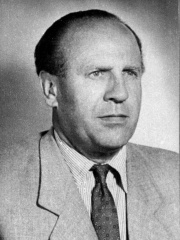 Oskar Schindler (German: [ˈɔs.kaʁ ˈʃɪnd.lɐ] (listen); 28 April 1908 – 9 October 1974) was a German industrialist and a member of the Nazi Party who is credited with saving the lives of 1,200 Jews during the Holocaust by employing them in his enamelware and ammunitions factories in occupied Poland and the Protectorate of Bohemia and Moravia. He is the subject of the 1982 novel Schindler's Ark and its 1993 film adaptation, Schindler's List, which reflected his life as an opportunist initially motivated by profit, who came to show extraordinary initiative, tenacity, courage, and dedication to save the lives of his Jewish employees. Schindler grew up in Zwittau, Moravia, and worked in several trades until he joined the Abwehr, the military intelligence service of Nazi Germany, in 1936. Read more on Wikipedia

Oskar Schindler was a German businessman who saved the lives of more than 1,000 Jews during the Holocaust by employing them in his factories.

Among BUSINESSPEOPLE In Czechia

Among businesspeople born in Czechia, Oskar Schindler ranks 1. After him are Tomáš Baťa (1876).