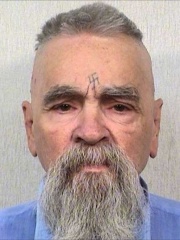 Charles Milles Manson (né Maddox; November 12, 1934 – November 19, 2017) was an American criminal and musician who led the Manson Family, a cult based in California, in the late 1960s. Some of the members committed a series of nine murders at four locations in July and August 1969. In 1971, Manson was convicted of first-degree murder and conspiracy to commit murder for the deaths of seven people, including the film actress Sharon Tate. Read more on Wikipedia

Charles Manson is most famous for being the leader of the Manson Family, a quasi-commune in California in the late 1960s. Manson's followers committed a series of nine murders at four locations in July and August 1969.

Among extremists, Charles Manson ranks 3 out of 209. Before him are Jack the Ripper and John Wilkes Booth. After him are Elizabeth Báthory, Gavrilo Princip, Osama bin Laden, Ted Bundy, Herostratus, Lee Harvey Oswald, Man in the Iron Mask, Gilles de Rais, and Ted Kaczynski.