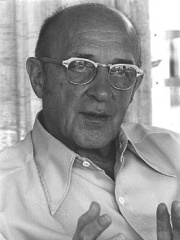 Carl Ransom Rogers (January 8, 1902 – February 4, 1987) was an American psychologist and among the founders of the humanistic approach (and client-centered approach) in psychology. Rogers is widely considered to be one of the founding fathers of psychotherapy research and was honored for his pioneering research with the Award for Distinguished Scientific Contributions by the American Psychological Association (APA) in 1956. The person-centered approach, his own unique approach to understanding personality and human relationships, found wide application in various domains such as psychotherapy and counseling (client-centered therapy), education (student-centered learning), organizations, and other group settings. Read more on Wikipedia

Carl Rogers is most famous for his theory of humanistic psychology. This theory emphasizes the importance of the individual and their self-actualization. Rogers believed that people are inherently good and have the ability to change themselves and their environment.

Among psychologists, Carl Rogers ranks 14 out of 183. Before him are Erich Fromm, John Dewey, Jacques Lacan, William James, Erik Erikson, and Viktor Frankl. After him are Gustave Le Bon, Albert Bandura, John B. Watson, Kurt Lewin, B. F. Skinner, and Edward Thorndike.