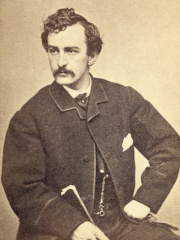 John Wilkes Booth (May 10, 1838 – April 26, 1865) was an American stage actor who assassinated United States President Abraham Lincoln at Ford's Theatre in Washington, D.C., on April 14, 1865. A member of the prominent 19th-century Booth theatrical family from Maryland, he was a noted actor who was also a Confederate sympathizer; denouncing President Lincoln, he lamented the recent abolition of slavery in the United States.Originally, Booth and his small group of conspirators had plotted to kidnap Lincoln to aid the Confederate cause. They later decided to murder him, as well as Vice President Andrew Johnson and Secretary of State William H. Seward. Although its Army of Northern Virginia, commanded by General Robert E. Lee, had surrendered to the Union Army four days earlier, Booth believed that the Civil War remained unresolved because the Confederate Army of General Joseph E. Read more on Wikipedia

John Wilkes Booth was most famous for assassinating Abraham Lincoln.

Among extremists, John Wilkes Booth ranks 2 out of 209. Before him are Jack the Ripper. After him are Charles Manson, Elizabeth Báthory, Gavrilo Princip, Osama bin Laden, Ted Bundy, Herostratus, Lee Harvey Oswald, Man in the Iron Mask, Gilles de Rais, and Ted Kaczynski.