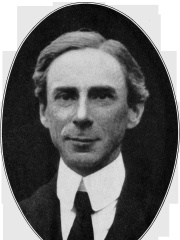 Bertrand Arthur William Russell, 3rd Earl Russell (18 May 1872 – 2 February 1970) was a British polymath, philosopher, logician, mathematician, historian, writer, social critic, political activist, and Nobel laureate. Throughout his life, Russell considered himself a liberal, a socialist and a pacifist, although he also sometimes suggested that his sceptical nature had led him to feel that he had “never been any of these things, in any profound sense”. Russell was born in Monmouthshire into one of the most prominent aristocratic families in the United Kingdom.In the early 20th century, Russell led the British "revolt against idealism". He is considered one of the founders of analytic philosophy along with his predecessor Gottlob Frege, colleague G. E. Read more on Wikipedia

Since 2007, the English Wikipedia page of Bertrand Russell has received more than 5,122,656 page views. His biography is available in 116 different languages on Wikipedia making him the 10th most popular mathematician.