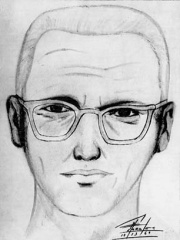 The Zodiac Killer is the pseudonym of an unidentified serial killer who operated in Northern California in the late 1960s. The case has been described as the most famous unsolved murder case in American history, becoming a fixture of popular culture and inspiring amateur detectives to attempt to resolve it. The Zodiac murdered five known victims in the San Francisco Bay Area between December 1968 and October 1969, operating in rural, urban and suburban settings. Read more on Wikipedia

The Zodiac Killer is most famous for the murders that occurred in the late 1960s and early 1970s in California. He is believed to have killed at least five people, but the number of victims could be as high as 37.

Among extremists, Zodiac Killer ranks 17 out of 205. Before him are Man in the Iron Mask, Andrei Chikatilo, Ed Gein, Ramón Mercader, Ulrike Meinhof, and Ted Kaczynski. After him are Albert Fish, Abdullah Öcalan, Abu Bakr al-Baghdadi, Charles Ponzi, Cleon, and Machine Gun Kelly.