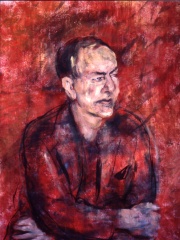 Herbert Alexander Simon (June 15, 1916 – February 9, 2001) was an American economist, political scientist and cognitive psychologist, whose primary research interest was decision-making within organizations and is best known for the theories of "bounded rationality" and "satisficing". He received the Nobel Prize in Economics in 1978 and the Turing Award in 1975. His research was noted for its interdisciplinary nature and spanned across the fields of cognitive science, computer science, public administration, management, and political science. Read more on Wikipedia

Since 2007, the English Wikipedia page of Herbert A. Simon has received more than 1,176,589 page views. His biography is available in 55 different languages on Wikipedia making him the 23rd most popular economist.

Page views of Herbert A. Simons by language