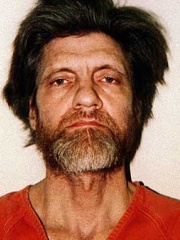 Theodore John Kaczynski (/kəˈzɪnski/ kə-ZIN-skee; born May 22, 1942), also known as the Unabomber (/ˈjuːnəbɒmər/), is an American domestic terrorist and former mathematics professor. He was a mathematics prodigy, but abandoned his academic career to pursue a primitive life. In 1971, Kaczynski moved to a remote cabin without electricity or running water near Lincoln, Montana where he lived as a recluse while learning survival skills to become self-sufficient. Read more on Wikipedia

Ted Kaczynski is most famous for being the Unabomber. He sent a series of bombs to people in universities and airlines. He killed three people and injured 23 others.