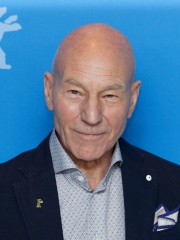 Sir Patrick Stewart (born 13 July 1940) is an English actor who is best known for his work in various stage, television, film and video games in a career spanning six decades. He has been nominated for Olivier, Tony, Golden Globe, Emmy, Screen Actors Guild, and Saturn Awards. Beginning his career with a long run as a member of the Royal Shakespeare Company, Stewart received the 1979 Laurence Olivier Award for Best Actor in a Supporting Role for his performance in Antony and Cleopatra in the West End. Read more on Wikipedia

Patrick Stewart is most famous for his role as Captain Jean-Luc Picard in the television series Star Trek: The Next Generation and the subsequent films.