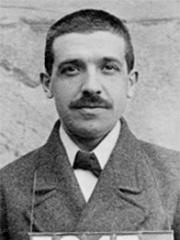 Charles Ponzi (, Italian: [ˈpontsi]; born Carlo Pietro Giovanni Guglielmo Tebaldo Ponzi; March 3, 1882 – January 18, 1949) was an Italian swindler and con artist in the U.S. and Canada. His aliases include Charles Ponci, Carlo, and Charles P. Bianchi. Born and raised in Italy, he became known in the early 1920s as a swindler in North America for his money-making scheme. He promised clients a 50% profit within 45 days or 100% profit within 90 days, by buying discounted postal reply coupons in other countries and redeeming them at face value in the U.S. Read more on Wikipedia

Charles Ponzi was most famous for his 1920s scheme, which he called "the Ponzi scheme." In his scheme, Ponzi promised investors a 50% return on their investment in 45 days. He would use the money from new investors to pay the promised returns to earlier investors.

Among EXTREMISTS In Italy