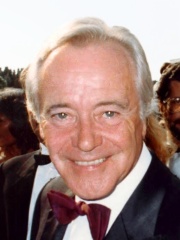 John Uhler Lemmon III (February 8, 1925 – June 27, 2001) was an American actor. Considered equally proficient in both dramatic and comic roles, Lemmon was known for his anxious, middle-class everyman screen persona in dramedy pictures, leading The Guardian to coin him "the most successful tragi-comedian of his age."He starred in over sixty films and was nominated for an Academy Award eight times, winning twice, and received many other accolades, including six Golden Globe Awards (counting the honorary Cecil B. DeMille Award), two Cannes Film Festival Awards, two Volpi Cups, one Silver Bear, three BAFTA Awards, and two Emmy Awards. Read more on Wikipedia

Jack Lemmon is most famous for his comedic roles in films such as Some Like It Hot, The Odd Couple, and The China Syndrome.