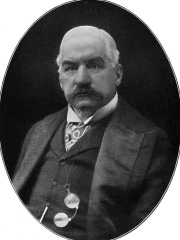 John Pierpont Morgan Sr. (April 17, 1837 – March 31, 1913) was an American financier and investment banker who dominated corporate finance on Wall Street throughout the Gilded Age. As the head of the banking firm that ultimately became known as J.P. Morgan and Co., he was the driving force behind the wave of industrial consolidation in the United States spanning the late 19th and early 20th centuries. Over the course of his career on Wall Street, J.P. Morgan spearheaded the formation of several prominent multinational corporations including U.S. Read more on Wikipedia

J.P. Morgan was an American financier and banker who founded the company that later became J.P. Morgan Chase. He was responsible for organizing the 1901 merger of the Carnegie Steel Company and other steel and railroad companies to form U.S. Steel. He also helped to form the United States Steel Corporation, which was the world's first billion-dollar corporation. He was also a key player in the formation of the Federal Reserve System.