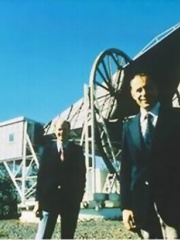 Robert Woodrow Wilson (born January 10, 1936) is an American astronomer who, along with Arno Allan Penzias, discovered cosmic microwave background radiation (CMB) in 1964. The pair won the 1978 Nobel Prize in Physics for their discovery.While doing tests and experiments with the Holmdel Horn Antenna at Bell Labs in Holmdel Township, New Jersey, Wilson and Penzias discovered a source of noise in the atmosphere that they could not explain. Read more on Wikipedia

Robert Woodrow Wilson is most famous for his work in the field of cosmology, specifically for his discovery of the cosmic microwave background radiation.