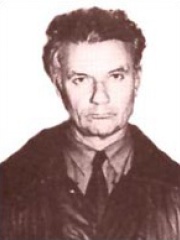 Andrei Romanovich Chikatilo (Russian: Андре́й Рома́нович Чикати́ло, romanized: Andréy Románovich Chikatílo; Ukrainian: Андрій Романович Чикатило, romanized: Andriy Romanovych Chykatylo; 16 October 1936 – 14 February 1994) was a Soviet serial killer nicknamed The Butcher of Rostov, The Rostov Ripper, and The Red Ripper who sexually assaulted, murdered, and mutilated at least fifty-two women and children between 1978 and 1990 in the Russian SFSR, the Ukrainian SSR, and the Uzbek SSR. Chikatilo confessed to fifty-six murders and was tried for fifty-three of them in April 1992. He was convicted and sentenced to death for fifty-two of these murders in October 1992, although the Supreme Court of Russia ruled in 1993 that insufficient evidence existed to prove his guilt in nine of those killings. Read more on Wikipedia

Andrei Chikatilo was a serial killer who murdered and mutilated at least 52 people in the Soviet Union during the 1980s.

Among EXTREMISTS In Ukraine

Among extremists born in Ukraine, Andrei Chikatilo ranks 1. After him are Boris Savinkov (1879) and Anatoly Onoprienko (1959).