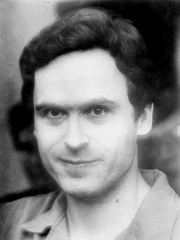 Theodore Robert Bundy (born Cowell; November 24, 1946 – January 24, 1989) was an American serial killer who kidnapped, raped, and murdered numerous young women and girls during the 1970s and possibly earlier. After more than a decade of denials, he confessed to 30 homicides, committed in seven states between 1974 and 1978. His true victim total is unknown, and could be much higher.Bundy was regarded as handsome and charismatic, traits that he exploited to win the trust of victims and society. Read more on Wikipedia

Ted Bundy was a serial killer who raped and murdered dozens of women in the 1970s. He was executed in 1989.

Among extremists, Ted Bundy ranks 7 out of 205. Before him are Jack the Ripper, Charles Manson, John Wilkes Booth, Elizabeth Báthory, Gavrilo Princip, and Osama bin Laden. After him are Herostratus, Lee Harvey Oswald, Gilles de Rais, Man in the Iron Mask, Andrei Chikatilo, and Ed Gein.