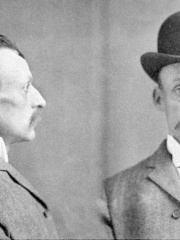 Hamilton Howard "Albert" Fish (May 19, 1870 – January 16, 1936) was an American serial killer, child rapist and cannibal. He was also known as the Gray Man, the Werewolf of Wysteria, the Brooklyn Vampire, the Moon Maniac, and The Boogey Man. Fish once boasted that he "had children in every state", and at one time stated his number of victims was about 100. Read more on Wikipedia

Since 2007, the English Wikipedia page of Albert Fish has received more than 6,440,872 page views. His biography is available in 32 different languages on Wikipedia making him the 18th most popular extremist.

Among extremists, Albert Fish ranks 18 out of 182. Before him are Ulrike Meinhof, Ramón Mercader, Ed Gein, Man in the Iron Mask, Abdullah Öcalan, and Abu Bakr al-Baghdadi. After him are Ted Kaczynski, Carlos the Jackal, Zodiac Killer, Cleon, Jim Jones, and John Wayne Gacy.