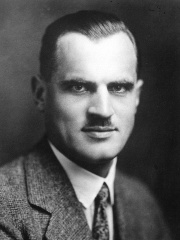 Arthur Holly Compton (September 10, 1892 – March 15, 1962) was an American physicist who won the Nobel Prize in Physics in 1927 for his 1923 discovery of the Compton effect, which demonstrated the particle nature of electromagnetic radiation. It was a sensational discovery at the time: the wave nature of light had been well-demonstrated, but the idea that light had both wave and particle properties was not easily accepted. He is also known for his leadership of the Manhattan Project's Metallurgical Laboratory at the University of Chicago, and served as Chancellor of Washington University in St. Read more on Wikipedia

Since 2007, the English Wikipedia page of Arthur Compton has received more than 288,783 page views. His biography is available in 77 different languages on Wikipedia making him the 91st most popular physicist.