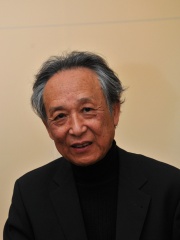 Gao Xingjian (高行健 in Chinese - born January 4, 1940) is a Chinese émigré and later French naturalized novelist, playwright, critic, painter, photographer, film director, and translator who in 2000 was awarded the Nobel Prize in Literature "for an oeuvre of universal validity, bitter insights and linguistic ingenuity." He is also a noted translator (particularly of Samuel Beckett and Eugène Ionesco), screenwriter, stage director, and a celebrated painter. Gao's drama is considered to be fundamentally absurdist in nature and avant-garde in his native China. Absolute Signal (1982) was a breakthrough in Chinese experimental theatre. Read more on Wikipedia

Gao Xingjian is most famous for his Nobel Prize winning novel, "Soul Mountain."